Moving towards the deployment of our first cleanup system in mid-2018, The Ocean Cleanup continues to test and verify system components. On August 29 we deployed the first part our new North Sea prototype. The new North Sea tests are aimed at assessing two variations of floater-screen connections as well as the application of antifouling on the screen.

With each passing day, the plastic floating around in the Great Pacific Garbage Patch continues to break down into harmful microplastics. This reality pushes The Ocean Cleanup team to test, analyze and work quickly ensuring we meet our first cleanup system deployment deadline of mid-2018.

The tests taking place in the North Sea will verify elements of our new and updated design. The system has changed a lot since our first prototype with the most obvious design change of moving from a moored system to a free-floating system. The other important design updates are in the choice of materials, especially for the floating body, the screen, and the connection elements. The North Sea offers the ideal location to test for durability due to its extreme conditions and will allow us to ensure survivability in the Pacific.

We are testing two separate components in three variations: 2 different floater-screen connections and application of anti-fouling on the sub-surface screen for approximately 6 months.

We will test two connections in three variations: 1) the screen wrapped around the floater with a) massive marine zippers and b) quick links and 2) the screen connected to the underside of the floater via a rail. The first test segment hit the waters on August 29 and the second test segment will be deployed late September/early October. The design that proves to be the strongest will be chosen for the first ocean cleanup system, to be deployed mid next year in the Pacific Ocean.

As with any object floating in the ocean, biofouling could start to grow on our systems. Biofouling could affect the system’s performance as well as attract sea-life to it, which is why we are taking the opportunity to test anti-fouling at the same time. The anti-fouling is generously provided by AkzoNobel, as part of the five-year-long partnership instigated early summer. Several variations of their biocide-free Intersleek antifouling are applied to parts of the screen to compare the results after 6 months.

Last year in June, we deployed our first prototype in the North Sea. With the system changing from a moored concept to free-floating one, the barrier’s stiffness needed to change in order to maintain its U-shape. The first prototype consisted of a rubber floater with inflatable chambers for buoyancy. In the new design, the floater is now a solid wall HDPE pipe.

It is important to note our first prototype was testing our moored concept, whereas the new prototype is only testing the durability of the new system components. Therefore, the test in the North Sea will not be a drifting system; it will be moored to the same test location as the previous prototype (12 nautical miles off-shore from The Hague), kindly allotted to us by the Dutch government. By mooring this test, the components are subjected to far higher forces than if the segment would be free-floating.

There are many steps to be taken while deploying technology offshore. The first test segment was first assembled onshore, transported to port, taken offshore where all connections were made, lifted from the vessel into the water and lastly connected to the buoys at the installation site. Just as for the previous North Sea test, we are very grateful to receive help from our off-shore partner Boskalis.

After successful assembly on September 22, we deployed the second test segment in the North Sea on September 26. This second segment features our new rail suspension design. 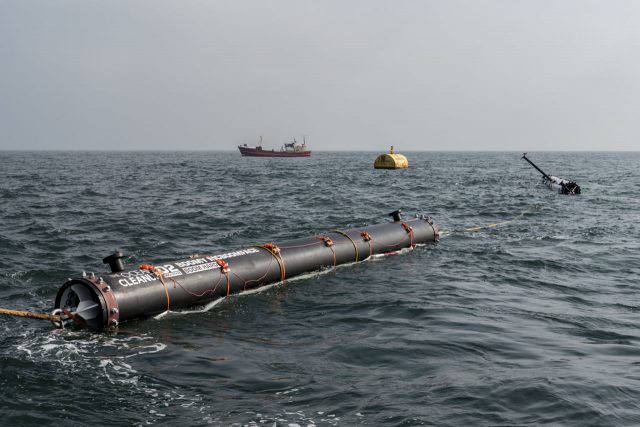 The two test segments will remain in the North Sea up to 6 months, to assess the endurance of the elements and their connections.

Follow us on social media to stay up to date on our North Sea test.

Are you passing by the test location and seeing something strange? Please contact us through emergency@theoceancleanup.com and we will follow up immediately. Please note: Only prototype related matters will be answered through this email.

Arjen received his Master of Science degree from Delft University of Technology in Marine Engineering in 2006. Since then, Arjen has 6 years of research experience from Delft University of Technology as well as 10 years of mooring and subsea engineering experience from Bluewater Energy Services. Arjen joined The Ocean Cleanup in 2016, as a Project Development Engineer for the cleanup system technology team. Arjen has been a crucial part in leading the team from concept phase to now transitioning into execution phase.