Our research team has just published a new article in the journal Environmental Science and Technology revealing that plastics within the Great Pacific Garbage Patch are loaded with pollutants at levels that may be high enough to harm organisms ingesting them.

This is particularly concerning when considering the high plastic exposure we found: the mass of plastics at the surface layer of the patch is around 180 times higher than that of marine life. This indicates that polluted plastics could be a primary food source for organisms feeding within this region. 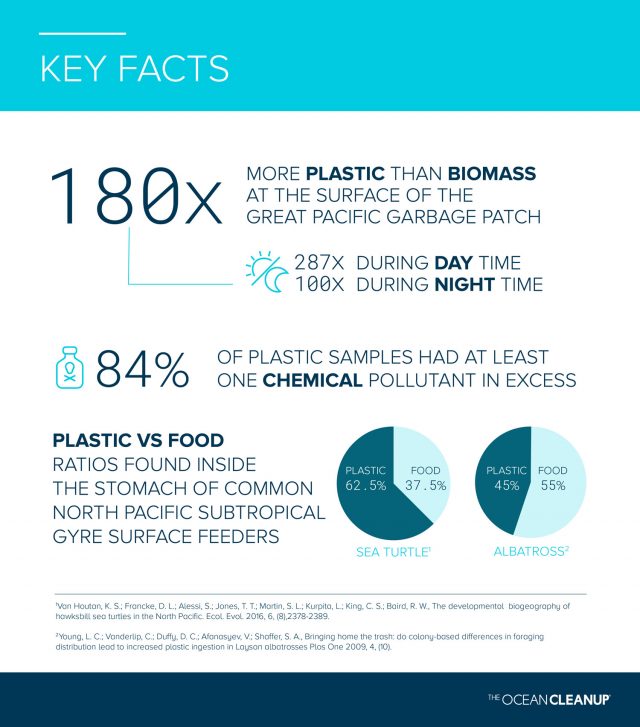 Ocean plastics contain harmful substances known as Persistent Bio-accumulative Toxic chemicals (PBTs). “Bio-accumulative” means that these pollutants can amass in the body of organisms, up to a level that can become detrimental to them and to the health of entire food webs. Since ocean plastics possess a wide range of sizes, animals as small as plankton and as big as whales can ingest them.

PBTs are added to plastics during the manufacturing process, and can also bind to them at sea through sorption from surrounding waters.

Even though it is well known that PBTs are found in ocean plastics, the environmental chemistry and toxicological hazard of plastic-bound pollutants are still poorly understood. Furthermore, no risk assessment for such chemicals is available.

We reported concentrations of 59 types of PBTs in ocean plastics collected at the center of the Great Pacific Garbage Patch. 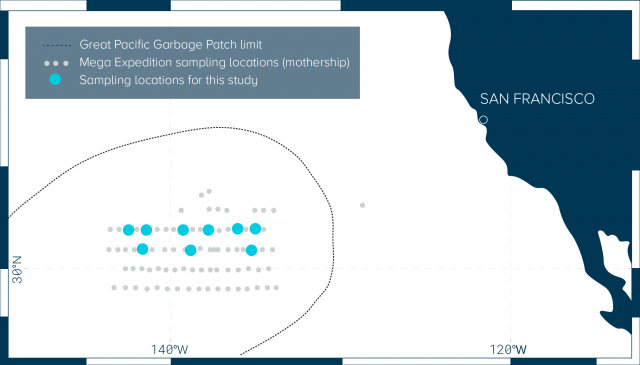 Around 84% of our plastic samples had at least one PBT chemical with concentrations exceeding safe levels. This indicates that oceanic plastic-bound PBTs pose a health risk to organisms ingesting these floating plastics.

Pollutant burdens were analyzed on a wide range of plastic types and sizes, from sand-sized microplastics to huge bundles of discarded fishing nets. From this detailed study, we discovered that PBDEs, which are plastic additives used as flame-retardants, have concentrations significantly higher in ‘hard plastics’ samples (32 μg per kg of plastic) than in ‘nets and ropes’ samples (7 μg per kg of plastic). 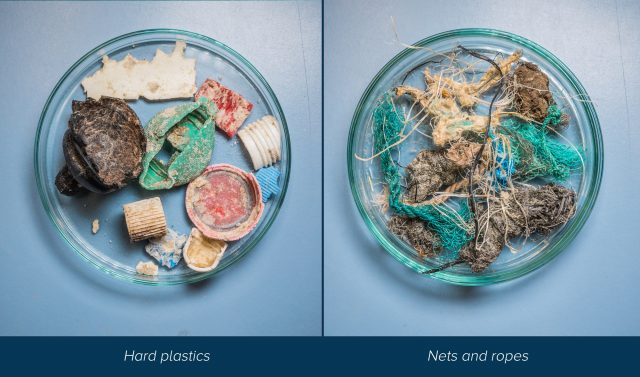 Based on this result, we suggest that some hard plastics, with their thicker walls, are still leaching PBDE additives into the environment. If this is the case, these plastics are taking these chemicals on a journey through the ocean, from their sources (e.g. rivers, fishing areas) to our remote study region.

Plastics will act as a significant carrier of PBTs to marine animals if (1) they are a major component of diets, and (2) a positive gradient for transfer of PBTs from the plastics to the organism exist.

By using information from this study, as well as data from previous research, we provided evidence suggesting that these two conditions may be met for organisms feeding at sea surface waters of the Great Pacific Garbage Patch. As such, plastics may play a role in transferring toxic chemicals to marine organisms and along food webs at the region.

By comparing the weights of plastic and organisms (e.g. plankton, fish, jellyfish, eggs) collected with our sea surface samplers, we estimated that at the patch the mass of plastics > 0.5 mm is 180 times higher than the mass of marine life of this same size. When looking at the smaller material only (0.5 – 5mm), we estimated that the mass of microplastics is 40 times higher than that of plankton. These ratios varied significantly between daytime and nighttime, with higher plastic/biomass ratios occurring during the day. This is because many marine organisms migrate to deep waters during the day to avoid predation and come up to the surface at night to feed.

Having more plastic than natural prey at the sea surface of the patch means that organisms feeding at this area are likely to have plastic as a major component of their diets. This hypothesis is corroborated with data available from previous studies. For instance, sea turtles by-caught in fisheries operating within and around the patch can have up to 74% (by dry weight) of their diets composed of ocean plastics. Another example is sea birds: the boluses of Laysan albatross chicks from Kure Atoll and Oahu Island have around 45% of their wet mass composed of plastics from surface waters of the North Pacific subtropical gyre. 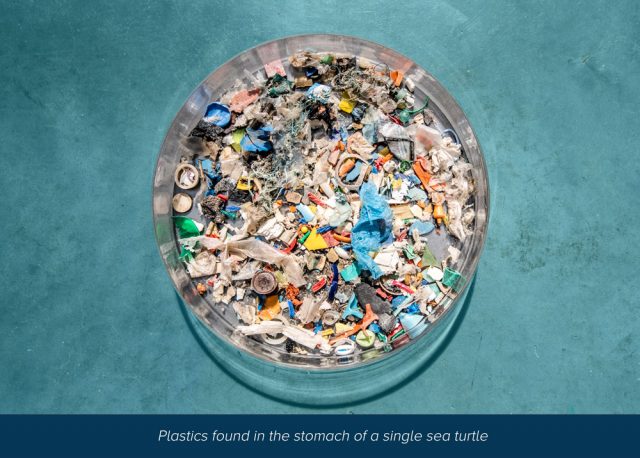 There is little data available on the relative mass of ocean plastic when compared to prey available to or ingested by marine animals. However, from personal experience sampling across oceans, I have noticed the plastic exposure situation in the patch is quite unique. All sea surface samples I have taken in areas of the Atlantic, Indian, Pacific and Antarctic oceans, outside garbage patches, had far much more marine life than plastic.

Furthermore, it seems that PBTs associated with plastics in the patch could be transferred to oceanic animals by gradient-based diffusion. PBDE concentrations in plastics of the present study were much higher than those found in Yellowtail fish and Laysan albatross caught within the North Pacific subtropical gyre (respectively 14 and 23 times). Such differences in pollutant concentration are high enough to indicate that PBDEs would likely be transferred from ingested plastic to these oceanic animals.

This study is a major scientific outcome of our 2015 Mega Expedition.

In addition to these findings, the Research team now looks forward to sharing the main results of the 2015 Mega Expedition and 2016 Aerial Expedition mapping efforts. We expect to have this detailed Great Pacific Garbage Patch characterisation published within a few months.

Julia has done her undergrad and masters in Oceanography at FURG in South Brazil. While studying, she worked for many research projects on topics such as the hydrodynamics of Antarctic waters and sea turtle feeding ecology. In 2009 she moved to Australia, where she completed her PhD at the Environmental Engineering School of the University of Western Australia. Julia joined The Ocean Cleanup team in 2013, working on the physical oceanography chapters of the Feasibility Study. She acted as the Chief Scientist of The Ocean Cleanup’s expeditions to the patch, and has lead the team that is characterizing and quantifying the plastic pollution problem in the world's ocean.