In August 2015, around 30 vessels crossed the Great Pacific Garbage Patch in parallel, creating the largest ocean research expedition ever. Sailing between Hawaii and California, the expedition mapped an area measuring 3.5 million square kilometers and collected more data on oceanic plastic than had been collected in the past 40 years combined. This reconnaissance expedition was a necessary step to fully understand the plastic pollution problem – and ultimately being able to clean it up.

If you work on solving a problem, it is important to thoroughly understand it as well. Around the time The Ocean Cleanup was founded, estimates on the amount of plastic in the Great Pacific Garbage Patch still ranged from tens of thousands of tons to tens of millions of tons. Furthermore, only a small part of the size spectrum (plastic pieces in the millimeter – centimeter range) had actually been measured, so there was no real understanding on the size distribution of plastic in the oceans.

Not only are these physical properties of the ocean plastic key design constraints for the cleanup system, but it is also the number one metric when it comes to the economics of a cleanup operation. The more plastic there is, the smaller the costs will be per kilo, and vice versa.

Therefore, we decided to embark on a Mega Expedition, aiming to produce the first high-resolution map of the area. Next to scale, it was also the first time large debris (in the decimeter – meter range) had been measured.

Although the samples are still being analyzed, initial findings indicate the concentration of plastic had been heavily underestimated, finding that most mass can be found attributed to the (previously unquantified) large debris.

HOW WE MEASURED THE PATCH

A compact surface trawl was dragged behind each vessel to catch smaller plastic particles. The device, known as a Manta Trawl, is standard scientific equipment used for measuring concentrations of microplastics.

The 171 foot-long Ocean Starr served as the fleet’s mothership. It was fitted with two 6-meter wide nets designed to capture high volumes of all sizes of plastic debris.

A custom-made smartphone app, enabled crews to easily count and characterize the large plastic objects floating by, adding another layer of data to the Mega Expedition.

The Ocean Cleanup Survey App is available for anyone to use at sea and can be downloaded for both iOS and Android devices.

After the expedition our lab started analyzing the catch, focussing on size, weight and debris type. Over one million pieces of plastic had already been analyzed – by hand.

An interactive version of the expedition map is available here. 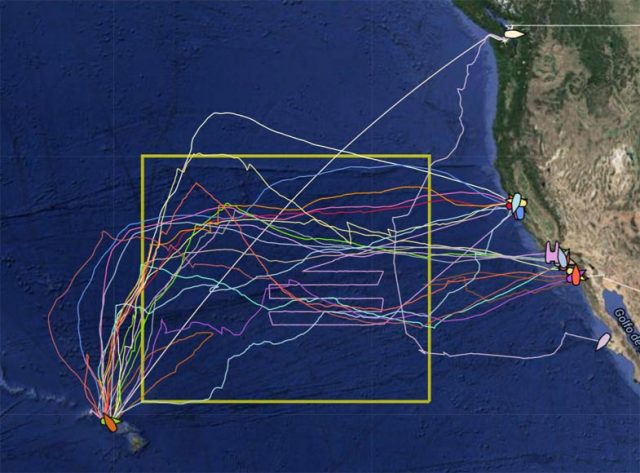 The combined findings from the Aerial Expedition as well as from the Mega Expedition have been published in Scientific Reports on March 22, 2018.

The results are alarming: around 80 million kg of floating plastic debris of various size and shape, principally made of Polyethylene and Polypropylene, accumulated in an area 3 times the size of continental France. Concentrations of microplastics, representing the majority of the estimated 1.8 trillion pieces inside the GPGP, have been increasing exponentially since the 1970s when researchers began observing quantities of tar and plastic floating in the North Pacific Ocean to more recent and consistent observations in the 2000s and 2010s. We also found that 92 % of the mass is still the be found in the larger objects (>5mm).

Find out more about the Great Pacific Garbage Patch: