Between November 2013 and July 2015 The Ocean Cleanup conducted six expeditions to the North Atlantic to measure the vertical distribution of plastic at sea.

In principle, plastic floats at the surface of the ocean, but small pieces can be pushed down by wind and wave action. Knowing down to which depth the ocean needs to be cleaned is essential to dimensioning the cleanup system. It also allows us to correct surface plastic measurements (which generally only cover the top 15 centimeters) for vertical mixing.

Prior to our vertical distribution expeditions, no data was available on plastic distribution in the top few meters of the ocean, with some even claiming plastic is distributed throughout the water column.

To fill this knowledge gap, The Ocean Cleanup designed and manufactured a new oceanographic tool called a Multi-Level Trawl, with which microplastic concentrations can be measured at 10 depths simultaneously.

This measuring device is towed alongside a vessel. It consists of an aluminum frame with 11 nets whose openings measure 50 x 30 cm, enabling the device to reach down to a depth of 5 meters. In preparation for expedition #4 (March 2015), the trawl was re-engineered for increased capacity and easier assembly and deployment.

After the first three expeditions, intermediate results were published in scientific journal Biogeosciences in 2015. Measurements showed that the microplastic concentration decreases exponentially with depth, with the highest concentration being at the surface. Already at depths of just a few meters concentrations approach zero. The higher the wind speed, the larger the vertical mixing effect.

A follow-up study, based on measurements taken during the last expeditions, was published in October 2016 in Nature Scientific Reports. The study shows that at least for buoyant plastic bigger than a sand grain (0.5mm), the plastic primarily resides on or near the surface. It also reveals that conventional methods to study ocean plastic underestimate microplastic loads by up to 97% due to ocean mixing processes that push part of the debris just below these sampling devices. Understanding how plastic is distributed in the ocean is important to assess its impact and allows us to adequately dimension our ocean cleanup systems. 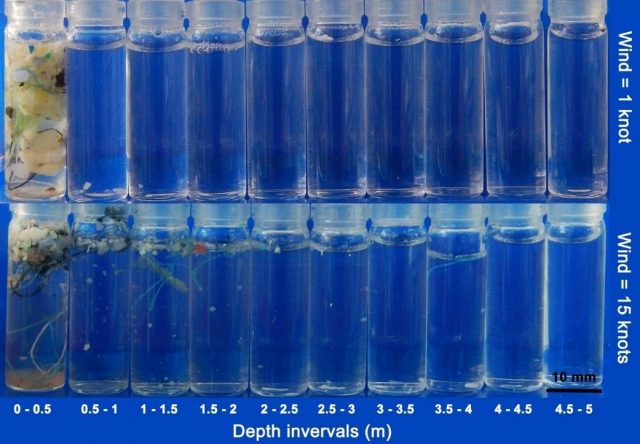 The vertical distribution of buoyant plastics at sea: an observational study in the North Atlantic Gyre:

The effect of particle properties on the depth profile of buoyant plastics in the ocean (2016):