A new ocean cleanup prototype is being deployed on the North Sea today. It is one of the last steps as we prepare to launch the first cleanup system in the Great Pacific Garbage Patch this summer. To understand how we arrived at this point, here is a brief history of the North Sea prototypes, and the reasons why we’re deploying another one.

Since the summer of 2016, The Ocean Cleanup has been testing a series of prototypes at our North Sea test site. The purpose of these tests is to gain experience in deploying offshore structures and to maximize the cleanup systems’ capacity to handle the harshest conditions they could face in the Pacific Ocean.

When it comes to the usability of test results, nothing beats the real deal. As such this summer we will launch a near-full scale cleanup in the Great Pacific Garbage Patch, which we hope will prove the technology works -kick-starting the entire cleanup. But, we are dealing with a very large system, and it would, therefore, be both slow and costly to only get real-world validations through full-scale, real-time testing. This is especially the case early in the development process, where major conceptual changes can (and did) occur.

To overcome this challenge, instead of testing the full system, we have been taking smaller ‘slices’ out of the bigger whole. If such a section can last at sea, this is a good indication that a full-length system will also be able to survive. This different environment allows us to iterate and understand our system at greater length. The conditions at our North Sea test site aren’t identical to those in the Great Pacific Garbage Patch, so the results of these prototypes are qualitative. And because the conditions are also conservative, we can rapidly assess which parts cope well and those that need improvement. 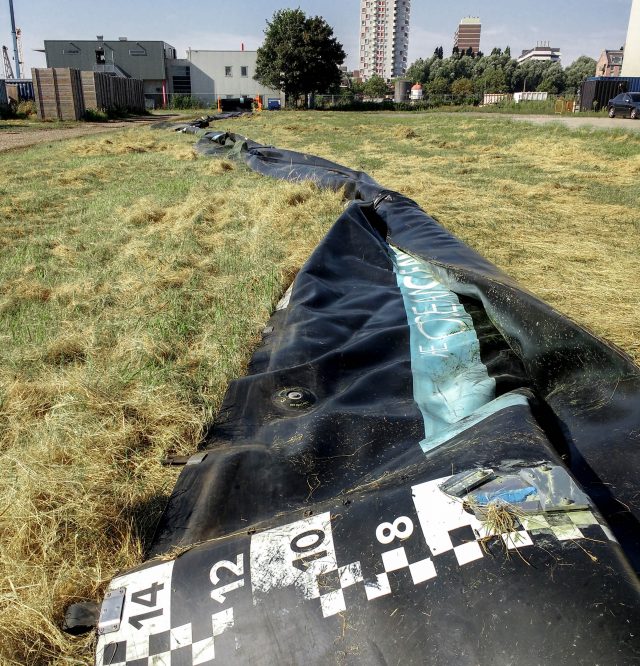 North Sea Prototype 1 (NSP1) rapidly taught us that a barrier design inspired by conventional oil containment booms won’t be able to last at sea for a very long time. The inflatable air chambers showed a tendency to leak very quickly, and the connection between the boom and the mooring wasn’t able to cope with the high loads. Although the NSP1 campaign was much shorter than planned, it did provide invaluable input for the structural engineering team who incorporated all these lessons in an upgraded barrier design, which was part of the drifting cleanup concept we unveiled last year.

Following the unveil, important engineering details still had to be figured out. The floater pipe specs were chosen and a screen material was selected. But, an important question remained: how can we connect the floater pipe with the screen that is suspended below it? This is not a trivial question, because this connection forms a bridge between a rigid element and a flexible element, and will, therefore, be subject to high loads and exotic/erratic motions.

To put three possible answers to this question to the test, we initiated the NSP2 in September of last year. We deployed two 12-meter-long test sections, one of which was fitted with a ‘dovetail connection’, while the other tested both a zipper and a shackle-based design.

Several months into testing NSP2, we ran into good news and, well, an Unscheduled Learning Opportunity. First, the good news: one of the connections, the dovetail connection type, successfully passed the test. The connection proved itself under rough North Sea storms, with peak conditions of 9.5m waves (Hmax), current speeds of around 2 kts and wind speeds of 50 kts.

However, right below the connection, something was missing – the screen

We didn’t lose the screen because it was still connected to the safety lines made of Dyneema, but it did tear from end to end, once we brought it back to land we also observed pockets of water inside the material across the surface of the screen. This came as quite a surprise to the team, who specifically selected this screen material for its durability and capacity to withstand very high loads.

To analyze the cause of the screen failure and to find a solution, a dedicated ‘Screen Team’ was assembled in December 2017. The screen material used for NSP2 was a laminate consisting of polyester fibers covered by a layer of TPU on either side, making the cause of the water pockets easy to find. Water ingress occurred at the edges of the material, which allowed the water to get in between the TPU layers. If this happens when the screen is moving, high pressure builds up inside the material and causes the layers to delaminate.

The source of the tear could be led back to a small manufacturing defect. During assembly, a small rip occurred at the top of the screen, close to the dovetail connection. Because the screen material is rigid in shear (i.e. it behaves more like a solid plate than a net), the loads at the top of the screen locally became very high. To add to that, the fabric didn’t have any ‘rip stop’. This, in combination with the asymmetrical loading, allowed the screen to tear fiber after fiber, with the crack slowly but surely working its way through the material.

The Screen Team therefore started a search for a screen design that:

The search was successful, and we have been able to incorporate these features into a geotextile-based screen design. The idea is that we have a strong polyester fabric as the main element of the screen. We also attached a strong-line once every meter to create a direct load path between the ballast weights and the floater connection, limiting the loads running though the screen fabric itself.

The fibers of the fabric are grouped in bands, which means the load will always be spread across many fibers, making tear propagation unlikely. As an added safety feature, the strong-lines themselves act as an additional rip-stop mechanism as well. The upside of this design is that it solves all the failure mechanisms we previously encountered. It is, however, more complicated, requiring many interfaces in the shape of stitches.

Since the previous NSP experiences have taught us that the screen design is something that is not to be underestimated, we decided to commission three additional tests to validate the chosen design.

The first test, which took place in a pool at Falck Safety Services in Rotterdam, was aimed at determining whether we should ballast the screen with a continuous ballast chain or use discrete ballast elements. The latter was chosen because it allowed us to concentrate the ballast load at the strong lines.

Secondly, we retrofitted the prototype barrier with the new screen design, which, as mentioned above, is being put to the test on the North Sea today. Lastly, we will be launching a new scale model testing campaign at MARIN, specifically aimed at analyzing the behavior of the screen while the cleanup system is in operation, as well as during the long tow to the Great Pacific Garbage Patch.

If the improved design passes our rigorous testing, the full-length screen will be ordered, to then be attached to Cleanup System #1 in time for its launch into the Pacific Ocean.

These Unscheduled Learning Opportunities have put more pressure on the timeline, but we are happy that we discovered them last year on a small section of the system in the – much more accessible – North Sea, instead of with a screen 600 meters in length, 1200 nautical miles offshore. And, if things go according to plan, we will still be on schedule to launch our first cleanup system this summer.

Stay tuned for more updates on the Road to the Cleanup.

The Exponential Increase of the Great Pacific Garbage Patch ›