After three years of research including two field expeditions, extensive laboratory experiments, and data analyses, we are thrilled to finally release the results of our study on the infamous Great Pacific Garbage Patch or GPGP. Our peer-reviewed manuscript published today in the journal Scientific Reports summarizes the methodology that led to our new estimate of total plastic waste currently floating at the surface of the GPGP. The study was authored by 16 international researchers and was supported by the contribution of dozens other volunteers, donors, vessel and aircraft crews, coordinators and researchers.

The results are alarming: around 80 million kg of floating plastic debris of various size and shape, principally made of Polyethylene and Polypropylene, accumulated in an area 3 times the size of continental France. Concentrations of microplastics, representing the majority of the estimated 1.8 trillion pieces inside the GPGP, have been increasing exponentially since the 1970s when researchers began observing quantities of tar and plastic floating in the North Pacific Ocean to more recent and consistent observations in the 2000s and 2010s. 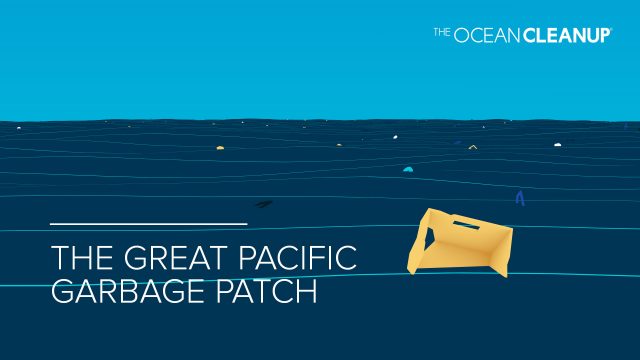 Read more on the decicated page >

Although randomly scattered on the surface of an infinite deep blue ocean, the larger debris from degraded containers, bottle caps or crates to floats and derelict fishing gear represent 92% of the currently available plastic mass floating in the region. As it degrades over time, in the long term, this material has the potential to increase levels of microplastics by 30-fold to a staggering total of around 50 trillion particles.

These figures portray the urgency of the situation and support the necessity to act rapidly by implementing substantial international measures in the coming decade to stop the increasing inflow of plastic waste into our ocean; and by supporting removal initiatives, such as coastal and ocean cleanups, for the existing mess accumulating in the environment since the introduction of plastic in our societies.

PLASTICS IN THE GPGP – HOW TO

Quantifying ocean plastic pollution at the sea surface is a laborious exercise, as this extremely popular material with one generic denominator, actually comes in many different shapes and forms. A major requirement of our study was to characterize ocean plastics by type and size from tiny microplastics (less than 5mm in size) to larger centimeter- or even meter-sized objects. We had to employ different methods to observe each category. Microplastics and mesoplastics (less than 5cm in size) were typically collected by conventional sea surface nets, also referred as Manta nets, trawled behind 18 of 30 yachts participating in the expedition over the course of three months between July and September 2015.

For macroplastics (less than 50cm in size) we developed much larger nets, that we called Mega nets, with a 6-meter-wide mouth that we deployed from our main monitoring vessel, the RV Ocean Starr. These Mega nets allowed us to sample a larger sea surface area and therefore collect more robust statistics on the occurrence of large objects.

During our expedition at sea,  we encountered four large ghost nets, which made us realize that our sampling effort should cover an even greater surface if we were to estimate the contribution of what we call mega plastic (more than 50cm in size). This led to the first ever aerial reconnaissance mission of a garbage patch in October 2016. We embarked on Ocean Force One, an ex-Vietnam-War era, Hercules C-130 aircraft, to conduct observations of large floating debris using several optical sensors. 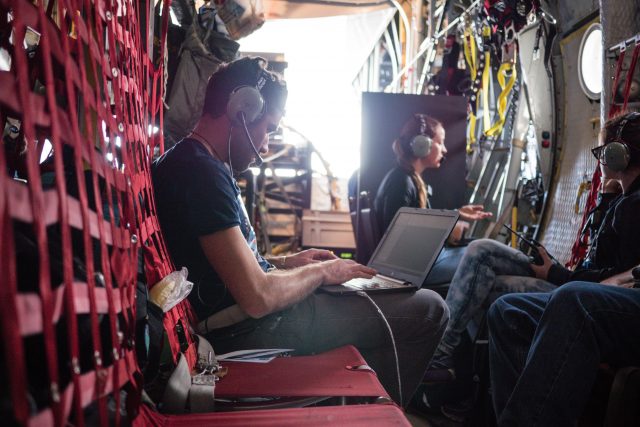 Samples collected at sea by vessel crews and aerial imagery collected aboard the plane were processed and analyzed in our laboratories. We then developed a numerical model reproducing the formation of the GPGP from data on oceanic circulation and potential sources of marine litter.

Our research allowed us to draw a more accurate picture of this large accumulation zone for marine litter but also raised new questions.

In our study, we provide evidence that plastic pollution has been increasing exponentially in the subtropical waters of the North Pacific Ocean over the last decades. Yet, quantities of floating plastic reported are two orders of magnitude less than current global source input estimates. We also observed discrepancies in particle size distribution, as the smaller microplastics (typically smaller than 1mm) are underrepresented in comparison to their larger counterparts. The mechanisms transporting ocean plastic from sources to sea surface accumulation zones are still poorly understood and there are evidence of processes that move floating microplastic particles from the sea surface into the deepest layers of the oceans. 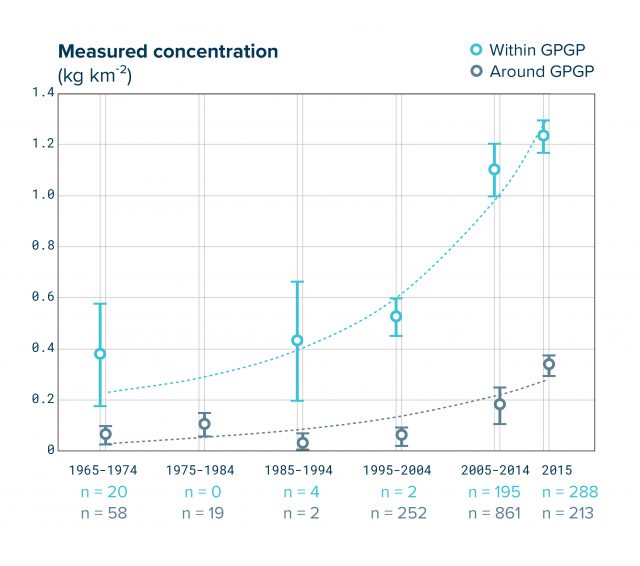 The next stage of our research will be looking at these questions. We are particularly interested in investigating the persistency of plastic currently floating in the GPGP. The deployment of the first Ocean Cleanup system this year will be a great opportunity to conduct additional research in the area. This can be done by means of monitoring the evolution of plastic pollution at the sea surface, and by looking deeper into the water column and on the seabed in search of the missing plastic.

Looking Back on our Most Advanced Scale Model Test to Date ›