Before we share some great news on the System 001 assembly front, we wanted to provide you with an update on our recent scale model tests, the most advanced we have conducted so far.

You might be wondering why we are still testing and simultaneously building our system. This comes down to our iterative design process. Remember, we are building a structure that has never been created before, so we are only able to truly learn about our system and its behaviors as we build it. And as we learn more about our system (through continued testing), we are able to adapt and redesign our system, as needed, in order to have the best possible chance of our system effectively working in the Great Pacific Garbage Patch.

Using the advanced technologies available at MARIN (Maritime Research Institute Netherlands), we were able to better understand the behavior of our screen through scale model testing.

WHAT ARE WE TESTING

In December, after our last screen material proved unsuccessful in the North Sea, a team of our engineers worked on finding a new design. After careful consideration and research, we chose the new screen material that was modeled in our testing at MARIN. Because the screen has a “cloth-like” structure, its behavior is highly dynamic, which makes it difficult for hydrodynamic model software to replicate numerically. So, we needed to go to greater lengths to learn more about this chosen design.

MARIN’s facilities were perfect for this, because they, not only, had the basin that allowed us to replicate the conditions of the Pacific Ocean, they had innovative measurement techniques that provided us with even further insights into our technology.

This extensive series of tests allowed us to do the following:

Scaling down the 120-meter section of our system for the tow out (including the floater), at a scale of 1:10, in MARIN’s offshore basin we tested the model in a range of current and wave conditions. The model was oriented in the basin in two directions: headed towards incoming currents (towing configuration) and perpendicular to the incoming current (operational configuration).

Measuring motions and loads in a very flexible and relatively light-weight material is highly challenging. Mounting sensors on such a material is very difficult and would also disturb the measurements. Therefore, as a measurement method for determining screen motions and loads in the screen, an advanced Digital Image Correlation technique was used. Using this method for our specific purposes is new and was a first for MARIN to use in one of their basins. 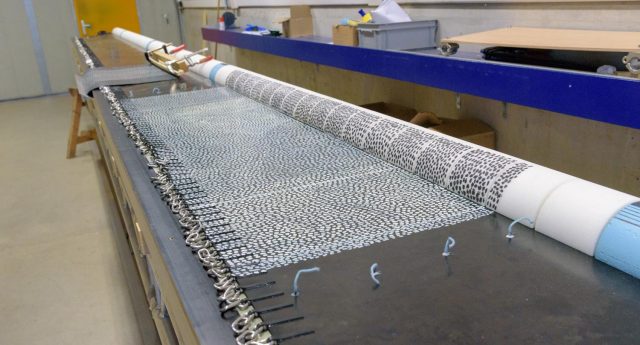 Because MARIN usually tests for ships and offshore platforms, with a scale factor of about 1:50 / 1:60, simulating the oceanic conditions also required exceptional efforts. As we were testing at 1:10, the waves needed to be much higher on the model scale to reproduce full-scale waves. This meant that MARIN had to make waves higher than they have ever produced in their basin, which pushed their facility to its limits for our testing program.

Thanks to the flexibility and creative thinking of the team at MARIN we learned a lot about our system with these series of tests. Together with our select team of engineers, they went above and beyond to help us meet our expectations of the scale model tests. Our preliminary conclusions from the tests are that the motions and forces are in the range of what we expected based on our numerical modeling. For peak functioning in the GPGP, we have optimized the screen design to accommodate the motions and loads that we expect it to endure. This means that the assembly and deployment of System 001 will continue as scheduled.

Arjen received his Master of Science degree from Delft University of Technology in Marine Engineering in 2006. Since then, Arjen has 6 years of research experience from Delft University of Technology as well as 10 years of mooring and subsea engineering experience from Bluewater Energy Services. Arjen joined The Ocean Cleanup in 2016, as a Project Development Engineer for the cleanup system technology team. Arjen has been a crucial part in leading the team from concept phase to now transitioning into execution phase.

‹ The Exponential Increase of the Great Pacific Garbage Patch