To meet our ambitious goals of deploying the first ocean cleanup system this summer, we are reminded of one of our basic design principles here at The Ocean Cleanup: doing is the fastest way of learning.

In less than five weeks, we progressed from signing the lease for an empty assembly yard in Alameda, California to a fully active construction site populated with contractors, engineers, machinery and the many components of the cleanup system finally coming together. All of this is in preparation for our next milestone: the tow test before we launch our cleanup system into the Pacific.

Late February, we announced that the former Naval Air Station in Alameda would be the base of our assembly in California. The yard, consisting of approximately 5000 square meters of vast, open space, is ideally located due to its proximity to the San Francisco Bay, with access via the Seaplane Lagoon, and its large span allowed us to transform it into the unique building site that is required to build the cleanup system(s).

After acquiring the lease, we arranged for fencing on the site to section off the space for our activities and to provide security for the equipment that was soon to be delivered. Simultaneously, we finalized the necessary administrative and legal requirements needed to commence our activities. The welding machinery was delivered promptly following the setup of the fencing, and with the arrival of the 51 floater sections from pipe supplier Agru, the fun was about to begin.

WELDING OF THE PIPE SECTIONS

The floater element is responsible for keeping the entire cleanup system on top of the water and to prevent plastic from passing over the system – two crucial points for a successful cleanup. The 51 pipe sections shall be welded together with 32 bollards located on top to create the full floater. The welding is considered one of the most critical steps in the assembly, as it is the process that will fuse the many pieces together to create the first 120-meter tow test floater unit, and eventually the complete 600-meter floater component of the cleanup system.

A uniform fusion of the pipe sections ensures that the floater is strong enough to withstand the forces of the ocean but still flexible enough to move with the waves. Maskell Pipe and Supply provided us with the contractors and welding equipment needed to conduct the welding. This large device, a McElroy fusion machine, is used specifically for HDPE welding, which made it ideal for our specific needs.

Unlike steel welding, HDPE does not require extra materials for fusion. For the welding process of our system, we began by taking two of the 12-meter pipe sections and placing them in the welding machine, where we would then heat the pipes to a high temperature. This heating process takes about half an hour to complete. Once the correct temperature is reached, the heating element is removed and the two pipes are pressed together with a slow pressure increase – allowing for precise vertical alignment and firm fusion of the two pipe segments. The newly-connected pipe section will cool and cure for several hours to ensure a high-quality weld. Weather permitting, we have conducted two pipe welds a day and 2-3 bollard welds in one day.

The fusion welding standards incorporated by The Ocean Cleanup are more time consuming than standard industry practice, but absolutely necessary to achieve the highest quality weld for the floater which will be deployed in a challenging and dynamic environment, namely the Pacific Ocean. Vertical alignment is also essential as only when we have this alignment correct the dovetail connections are suitably lined up to connect the screen beneath the entire system. Inspectors from Applus RTD were on site to scan every weld using Ultrasonic Testing (UT) to ensure there were no defects in the weld.

As we have welded these segments together, the 120-meter section for the tow test eventually occupied most of our yard. Using the machinery and some specialized manpower of our neighbors in Alameda at Power Engineering, we have been able to safely move these pipe sections along the firing line. Once we finalized the welding of the 10 pipe sections for the tow test unit, the next step was to attach the non-permeable screen.

The screen, produced by Ecocoast, is the part of the cleanup system that will retain the plastic. It hangs 3 meters beneath the floater and will act as a barricade for any plastic it encounters. We learned from the second North Sea Prototype that the dovetail connection was the strongest option to conjoin the screen to the floater, so this was included in the final design for System 001.

At a rate of 40 meters per day, the screen was placed on the dovetail connection, using a bracket system to hold it in place.

Initially, this was an area of concern for us since we had not connected the screen to the pipe at this scale before, so we anticipated some challenges during this step. In the end, the turnaround on the screen placement was swift and the entire process proved to be smoother than expected. This allowed us to quickly advance in the assembly and begin preparations for the attachment of the stabilizing floaters (stabilizers).

Affixed on various points on the top of the floater will be five monitoring pods used for navigation, satellite and cameras, which have been fabricated by subsea technology company, Seatools. To balance out the weight of these pods, we are attaching stabilizers to prevent the system from rotating. In total, there will be ten of these stabilizers on the entire system, consisting of either single or double floaters.

These stabilizers will be attached directly to the system as we move it into the water. To do this, a barge will be moved onto the Seaplane Lagoon that provides us with the space and the crane capacity to connect the stabilizers to the unit as we gradually move it into the water. For the tow test we will use simplified temporary stabilizers as the rotation of the pipe is not foreseen to be as significant as with the total 600-meter system. We have yet to assemble the temporary stabilizers, as they will be the last components attached before we commence the tow test.

Before towing this system out of the Seaplane Lagoon, we needed to be certain that there is nothing beneath these waters that could collide with our system. Using a small vessel with a high-resolution twin-beam scanner, surveyors from eTrac were able to make a 3D map of the entire lagoon. Using this map, we were able to see if there was anything in the water that might interfere with the system as we slowly tow it to the San Francisco Bay. Fortunately, nothing has been detected that would prevent a smooth tow out. 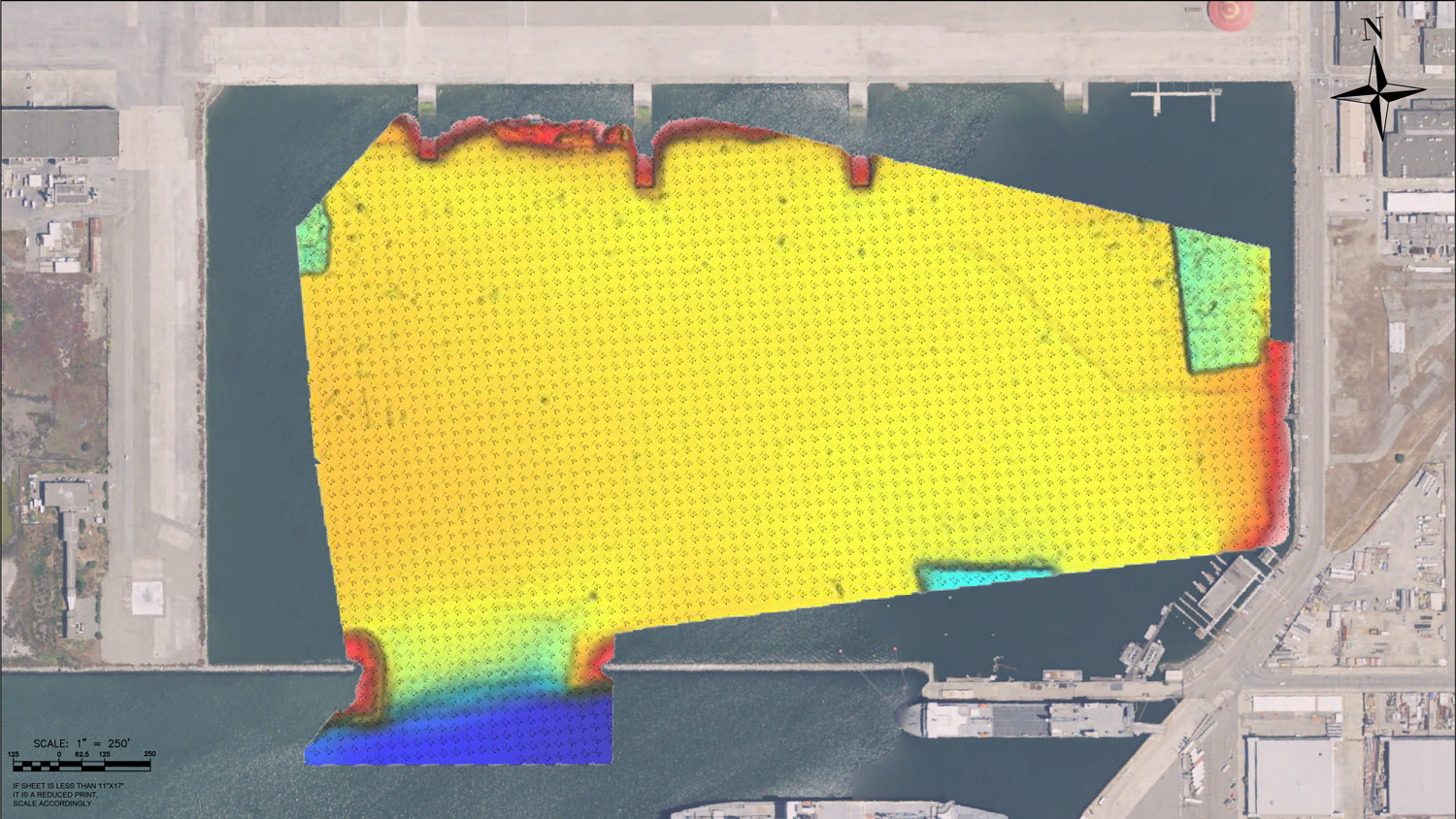 The tow test will be our final opportunity to test the system before we begin our Pacific Ocean trials. Once in the Pacific, we will learn exactly how our system will perform in its intended location, but it will be vastly more difficult to make any necessary adjustments once it is out there. With this understanding, we plan to put the tow test unit under the roughest conditions possible to learn as much as we can before we make the trek even further into the Pacific Ocean.

This 120-meter segment will be towed 40 nautical miles outside of San Francisco to the designated test area. The vessel will tow the unit in a multitude of directions to test the hydrodynamic behavior of the system and the durability of the screen. We will then bring the segment back to shore and analyze the results of the tow test and determine if any improvements are necessary before we go forward with the assembly of the full system.

Sticking to our design principle, we will continue to learn by doing – and with the upcoming tow test, we will learn a lot about our system and the processes that facilitated it. This tow test is yet another important step as we near deployment and, hopefully, begin cleaning the oceans.

‹ Looking Back on our Most Advanced Scale Model Test to Date