What we are doing is unprecedented. There has never been a cleanup system of this magnitude deployed in the ocean. Therefore, continual testing is integral to our design process. We first had to learn as much as we could through scale model testing, North Sea prototypes, and computer modeling, but, because of the size and nature of our project, some things must be thrown into the deep end of the water, or the Pacific.

This was the purpose of our Pacific Trials. It was our last chance to run through a series of tests before we tow System 001 the distance to the Great Pacific Garbage Patch. For the last two weeks, our crew aboard the Maersk Launcher conducted various tests on the system and the environment around it to be certain it was ready for the challenge of the world’s largest ocean garbage patch.

Deployment to the patch was never certain though; we would not tow this 600-meter device an extra 850 nautical miles if we believed it would disproportionately outweigh the benefits of it being there. This is why, every step of the way, the Rotterdam team maintained communication with the offshore crew to carefully prepare for this decision.

There were many tests performed since September 15th, but there were five main checkpoints that needed to be confirmed in order to commence the journey to the Great Pacific Garbage Patch. This list included:

Here is the checklist System 001 needs to fulfill at the test site before it can head to the Great Pacific Garbage Patch. 1 down, 4 to go. pic.twitter.com/cYVxs9KQJR

The u-shape installation was the first item accomplished. The team was able to complete the operational configuration setup within two days by attaching the closing lines through the middle of the system. This was the first time the system had ever been in its intended U-shape, and, this is also an important feature for the system’s ability to move through the water and collect plastic.

The span of the u-shape showed satisfactory measurements for most of the trialing. These measurements were observed in various states, such as during reorientation or changes in the surface current. It was observed for a period of two hours that the span decreased to an inefficient range, likely due to external factors, but returned to a favorable width within this time.

Reorientation is another essential objective for testing. The system needs to reposition itself with the wind to keep the collected plastic in its center and to be able to continue in the path of plastic collection. We planned to tow the system in three different directions: 45, 90 and 180 degrees. Fortunately, Mother Nature stepped in and shifted the wind as such that it allowed us to observe the system moving from 45 and 90 degrees. The Maersk Launcher towed the system facing against the wind at 180 degrees.

Timelapse drone shot of System 001 during one of the re-orientation tests. If it performs well for the remaining tests, we will have another checklist item completed. pic.twitter.com/u630jEX2KZ

The system followed the wind shifts and reoriented with the wind from all three positions. As expected, it was observed that with stronger wind speeds the system would orient much more efficiently.

System 001 needs to move faster than the plastic in order to catch up to and collect plastic. The system did pick up speed in various wind conditions, but, until we are in an area that has plastic (i.e. the patch) and we have better surface current data, we will have a greater certainty if the system moves at an effective speed.

One item that was tested was the ability to capture floating debris by using GPS-equipped buoys, known as drifters, that were placed in the water and monitored as the system floated towards them and move them to the center of the floating screen. In one instance, the drifters moved away from the system and the team is currently analyzing why this occurred. In other instances, the drifters did make their way into or stay in the center of the system. 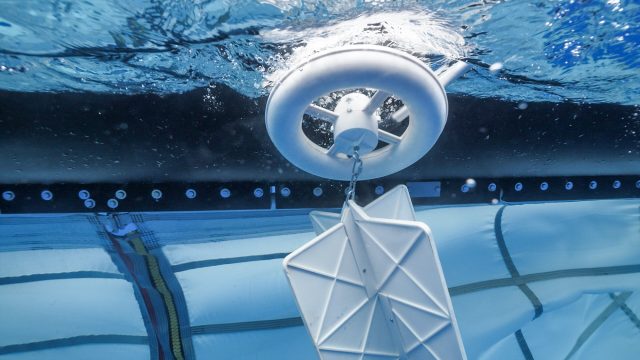 The marine life observers on board monitored the system through various checks, and during the trials, it was noted that only five fish were seen near the system before they quickly moved on their way.

Overall, there was no significant damage recorded. The system is intact, and all major components are still functioning. The skirt, however, did incur some damage. It was observed upon arrival to the Pacific Trials destination, that there were two tears in the material above one of the ballast weights. It was concluded that this is likely resulting from the safety line connection when the screen was hoisted in the Seaplane Lagoon. Repair has not been possible due to the placement and accessibility, but, neither tear has shown to worsen during this trial period. The interim solution is to roll up the damaged screen and ballast weight below to reduce the loads during the transfer to the GPGP. While we are continuing to explore options for repair, we do not expect these tears to have an effect on the functionality of the system.

After approximately two weeks of testing, the crew came to a point where they would either need to return to Alameda for repairs or adjustments or continue the long journey to the Great Pacific Garbage Patch.

On Tuesday evening in Rotterdam (Tuesday morning for the crew on the Launcher), a meeting was held to fully evaluate the current situation. A careful rundown of all tests was presented, and concerns and issues were brought to the table. After two hours of evaluation and discussion, it was concluded that System 001 shall continue to the Great Pacific Garbage Patch.

THE PATCH AND BEYOND

Since Tuesday, the offshore crew has returned the system to the towing configuration (out of the u-shape and in a straight line) and is en route to the patch. It will take between two and three weeks to arrive to the center. The crew is prepared to continue testing System 001 for its plastic capturing efficiency, effect on marine life, and various other features that can only be observed from the patch. The coming months will give System 001 plenty of opportunities to prove itself and we are hopeful that it will continue to pass the tests.