It has been four weeks since we deployed System 001 in the Great Pacific Garbage Patch (GPGP). In this time, we have observed that plastic is exiting the system once it is collected, so we are currently working on causes and solutions to remedy this. Because this is our beta system, and this is the first deployment of any ocean cleanup system, we have been preparing ourselves for surprises.

Although we are not harvesting plastic yet, based on the current results, we are positive we are close to making it work. Here is what we have observed so far and how we plan to tune the system to work and not just collect, but also retain the plastic caught.

On October 6th, we successfully completed the Pacific Trials 350 nautical miles from land, through which we were able to confirm the system’s general behavior and seaworthiness.

After giving the go-ahead to continue the remaining 850 nautical miles to the GPGP, we deployed System 001, or Wilson, in its operational configuration. There has been one crew change since the launch, which brought in a new set of team members with different objectives. The main goal of Crew 1 was to deploy and install Wilson in its U-shape, and, now, Crew 2 is focused on observation, data analysis and, soon, plastic collection. These have been their main, initial observations:

It is also possible that the vibrations in the ends of the U-shape could be creating a type of ripple-force field that repels the plastic away from as it nears the mouth of the system.

We believe the first solution we will attempt could potentially remediate both of these causes.

We have conducted scale model tests and created computer models, and, yet, this phenomenon was never observed, so we have not had a solution ready to deploy. Fortunately, the first logical solution can be easily-enacted because we have the materials available on board the vessel.

We will address the speed difference by opening the U-shape about 60-70 meters wider. Doing this should, theoretically, have two effects on the speed of the system; firstly, it will increase the surface area of the system exposed to the wind and waves, which are the driving forces of the system. Secondly, by widening the span, we think this could also reduce the propulsive force caused by the undulating ends, simply because it would not be directed straight into the motion direction of the system anymore. 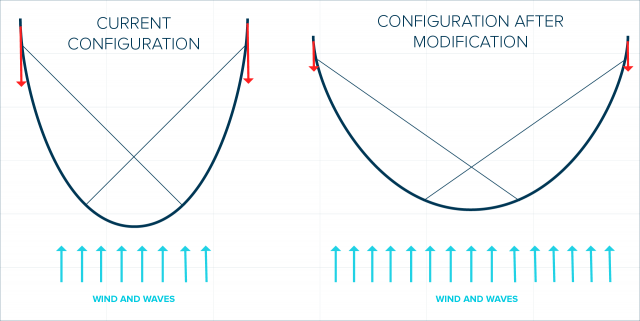 To perform the extension, we will lengthen the closing lines which keep the cleanup system in its U-shape. We will perform the extension in several stages until we will (hopefully) reach the desired effect. As an increased span is expected to have a negative effect on the system’s ability to rapidly pivot when a change in wind direction occurs, we must be careful to not increase the span too much.

System 001 must work before we can look to scaling up, so there is no time to waste. While we are busy implementing this first solution, our team is continuing to analyze more data and test alternative solutions until the system is fully operational.

Currently, the weather appears to be favorable to implement the closing line extensions this Thursday. We’ll keep you posted as this happens.