The Aerial Expedition is about to begin! In a few days, we will start conducting visual surveys, supplemented with state-of-art sensors to quantify the biggest and most harmful type of marine debris: ghost nets. It is the most important missing piece of the puzzle remaining after last year’s Mega Expedition.

On September 26, our C130 Hercules aircraft will arrive at Google’s Moffett Airfield near Mountain View, California. The mission crew will conduct two test flights above this airport to calibrate our ocean plastic sensors and familiarize themselves with the survey protocol.

Then it’s time for our team of 10 researchers, 3 sensor technicians, and 7 navigation personnel to head out for two long flights over the garbage patch. The aircraft, named Ocean Force One (following a Twitter suggestion), will fly at a low airspeed (140 knots) and altitude (400m) while mapping the area.

THE NAKED EYE, AND HIGH-TECH

We developed our visual survey plan in collaboration with Curtin University and The University of Newcastle. Four experienced observers will scour the ocean surface from the aircraft’s open paratroop doors, while two computer operators log the data. The pilots and navigator will also search for ocean plastic from their seats in the cockpit, where another computer operator will log their sightings.

In addition to visual surveys, we are fitting the aircraft with an array of sensors – an experimental setup through which we aim to improve accuracy, as well as record key characteristics of the objects spotted, including their volumes.

Because our goal is to clean up the trash, you can imagine how important it is for us to know how many tons of rubbish we’ll be extracting from this area just a few years from now. Thanks to our previous experiments with ocean plastics, we know they all have very similar densities. This means we can use the sensor’s object volume estimates to transform plastic abundances into mass concentrations (kilograms of plastic per km2 of sea surface, for example). 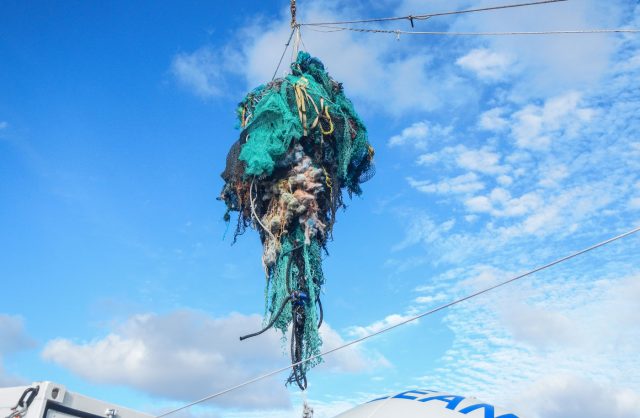 Our main sensor partners are Teledyne Optech and ITRES. They will install, operate and analyze the data coming out of our two main sensors: the CZMIL system (which uses LiDAR to create a 3D-image of the ghost nets) and the SASI hyperspectral SWIR imaging system (which uses an infrared camera to detect ocean plastic).

After the expedition, we will collaborate on an automatic ocean plastic detection algorithm using all of our sensor data. This way, we will get the spatial resolution from a digital camera, the spectral readouts of plastic from the SWIR imager, and the underwater debris volume from the LiDAR.

‹ An update from the North Sea