In our last update, we shared the modifications to our system design and how we plan to test them in the Great Pacific Garbage Patch this summer. Now, only one month later, the latest version of this design, dubbed System 001/B, has arrived in the patch after eight days of transit.

This is an exciting step in our journey – seeing as how we designed, procured, assembled, and launched an entirely new system in only four months. With every iteration and deployment of our cleanup systems we get closer to reaching proven technology. What we are doing is challenging, though. The road to cleanup is not linear, nor is it easy – but it’s definitely worth doing. During the deployment of System 001/B, we will trial modifications to speed it up or slow it down, with the end goal of creating a consistent speed through plastic that allows us to effectively capture and retain the catch. If we do not achieve proven technology status with this campaign, we will certainly learn a great deal from this system for the next iteration. Before we give more details about the upcoming tests, here’s a bit of background on the assembly and launch of System 001/B.

Plastic in the patch is persistent and it’s not going away by itself, therefore time efficiency is a factor we are prioritizing with this adapted system. Speedier turnaround in our processes also means we learn faster as well. With this in mind, we knew we wanted to get back to the patch as soon as possible, so the assembly and departure location needed to accommodate the short lead time we set to launch System 001/B. When preparing for System 001, we leased and built up an entirely new assembly yard (in Alameda, CA) – this was not an option if we were to return to the patch quickly. This time around, we had more opportunity because the revised system is smaller (approximately one quarter the size of Wilson) and more modular.

After scouting locations, we found a site in Campbell River on Vancouver Island (Canada) that met the criteria we needed to build and launch System 001/B: it’s adjacent to an inlet of water and the space, a former pulp factory, was conveniently located near the equipment we required to assemble the system. The materials were selected based on suitable, short lead times and therefore the procurement process proceeded swiftly. Once these materials arrived on site in early June, construction commenced and was completed in just five days; the welding of the HDPE floater lasted approximately two days and then we were ready to launch.

The deployment of System 001/B went very smoothly. Once the Maersk Transporter arrived in Vancouver from San Diego, the system was connected to the vessel and the crew prepared for their journey. Because we are not towing with the skirt attached to the system and we have less loads on the system in general, the vessel can travel faster, thus transit time is considerably less – approximately one week of travel in total. Additionally, the simplifications on this design made for a smoother tow. Along the route, whales and albatrosses were spotted. The team knew they were getting close as the plastic sightings began to increase substantially. Upon arrival, the crew deployed the system into the Great Pacific Garbage Patch and arranged it in its operational configuration (U-shape). Following additional setup in the next day, the team can begin conducting the tests. 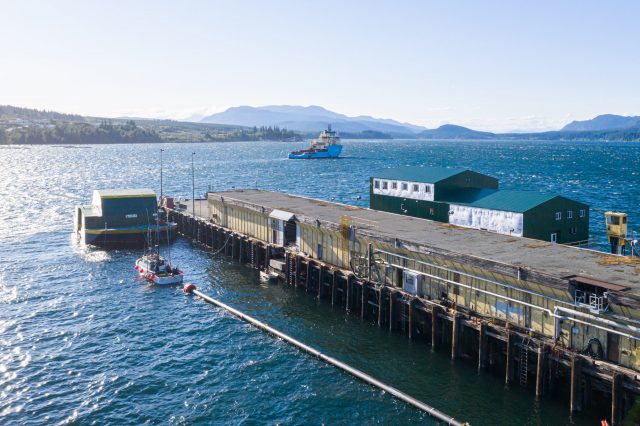 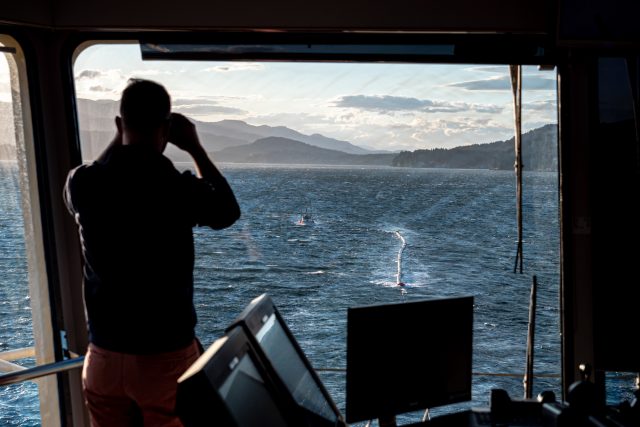 We learned a great deal during our time offshore with Wilson. Namely how to improve our approach and speed up the life cycle of our processes. Using the learnings from the root cause analysis, we chose to build an entirely new system. For testing purposes, this system is 160 meters rather than the intended size of 600 meters or larger. When we have a proven concept, we will again increase the size of Systems 002 – 060.

Using System 001/B, we will test multiple options that are aimed at solving the retention issue. We observed with Wilson that the system did not maintain a consistent speed, so plastic would float out of the system. Solving this will be done by either slowing down the system or speeding it up, the main point is to keep the speed consistent and ensure plastics always come from the same side. We will trial both approaches with System 001/B and here’s how we have planned to do it:

The first tests will be conducted to attempt to slow down System 001/B, using the parachute sea anchor as the main testing component for this option. Should the slow-down option prove ineffective, we will face the system in the other direction and speed it up (similar to the approach we took with Wilson) using inflatable bags or fenders. All of the modifications we are trialing will not necessarily be the final design – they are essentially a first phase of possible alterations we are testing. If either the slow-down or the speed-up option works, we will then pursue a more permanent solution with this design feature.

These tests will be conducted over the next two months. We can reconfigure the system while offshore to eliminate the need to return to shore, therefore, we can continue trialing these options with little lag time. This modular approach we have taken enables us to make changes swiftly, thus significantly improving our iteration cycle time and allowing us to adapt at a quicker pace. We are looking forward to what’s to come and we are prepared to encounter more unknowns. We do know that in these upcoming weeks, we will learn as much as possible – the ultimate goal being to reach proof of technology.

We will keep you updated on social media, where you can follow us on Facebook, Twitter, and Instagram. For system location and details about the technology, check out the System 001 page for more information.