Last September, we deployed System 001 into the Great Pacific Garbage Patch – marking the first-ever attempt to start cleaning it up. During the last campaign, we confirmed many key assumptions of the design, but also encountered two unscheduled learning opportunities: the system did not maintain a sufficient speed, allowing plastic to exit the system, and a stress concentration caused a fatigue fracture in the HDPE floater (more detailed information in our Root Cause Analysis).

With the understandings from the root cause analysis, the engineering team began to work on solutions that we could start trialing in the Great Pacific Garbage Patch (GPGP) in June. The upgraded design, which we have dubbed System 001/B, will entail various modifications (listed below) that will be tested during our next campaign. By adapting the design to address these unknown learning opportunities, we aim to have a system that can effectively capture plastic and withstand the forces of the ocean.

Survivability is essential if we intend to keep our systems deployed for long periods of time and expect them to endure the harsh winter months in the ocean. In addition to the modifications detailed below, the main improvement of the structural design was to simplify the HDPE pipe and allow minimal fluctuations in the wall thickness. The following we aim to test in the next campaign:

1. New screen design – because the rail connection (dovetail connection) was the cause of the fatigue fracture, we have completely eliminated this aspect of the design by bringing the screen slightly forward and connecting it to the pipe using slings. This simplifies the connection to the system and should allow us to minimize stress concentrations.

Because this topic is essential for cleanup, we will test two options that will either speed up the system or slow it down. They are:

1. Inflatable buoys – one idea was to add a sail to increase the windage of the system, but the loads from a sail would be too great during storms – approximately five tons of force for every meter of sail. The force would cause the system to topple over, resulting in complicated structures to keep it upright. This option was, therefore, not feasible. However, this thinking did lead us to the idea of disconnecting the sail from the floater and let the sails float freely. To test this idea, we will trial giant inflatable buoys on the front of the system which will tow the system forward, propelled by the force of the wind. 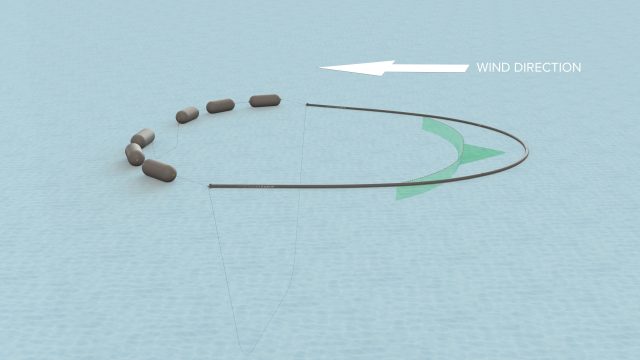 2. Sea anchor – an alternative option, should the buoys prove ineffective at speeding up the system, is to attach a massive 20-meter-diameter parachute-like sea anchor, which will turn the system around and, in theory, maintain a slower speed than the plastic. Rather than attempting to go faster than the plastic, this option brings the speed close to the speed of the water, making use of the observation that the plastic can travel substantially faster than the water current. 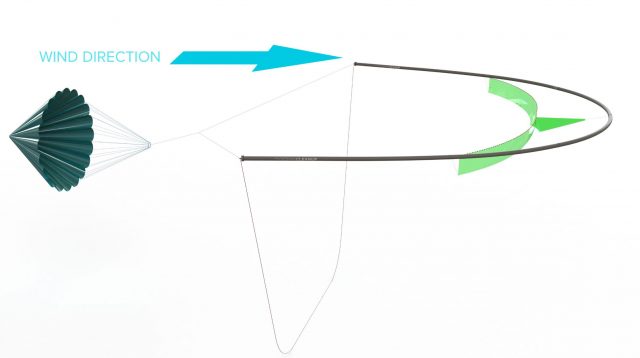 Side note: if you are familiar with previous designs, the parachute option might sound similar to the deep-sea drift anchor we proposed in May 2017. The benefit of the parachute is that it will operate at the free surface in the same water layer as the system, whereas the anchors would be subjected to deeper ocean currents; and, since the current profile changes speed and direction over depth, it is better for the behavior of the system to have this functionality subjected to the same forces as the system.

The basic principle behind the iterative design process is to test, learn, and repeat until you have a proven concept. We do not know with certainty that these proposed options will solve the issues we have encountered. In fact, there may still be further unknowns, as is the nature when doing something that has never been done before. What we do know, is that every day we are not yet operational the plastic pollution problem is not getting better. This is why it is important to return to the GPGP as soon as possible, test these options, and make the necessary adjustments from these findings, also, as quickly as we can. 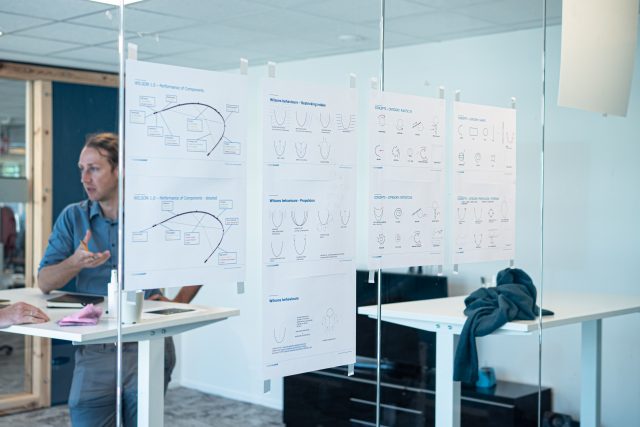 During the last campaign, we learned that some of our processes hindered quick iteration cycles. This led to two additional changes to our approach:

1. Smaller system design – We are reducing the size of the system by a factor of three, which means we can speed up the procurement and assembly processes, as well as the tow, and be return to the patch next month, rather than next year.

2. Modular approach – the designs we will be testing are much more modular. We will be able to make significant changes while offshore, preventing us from having to return to land (a time prohibitive process). This approach lets us speed the system up, slow it down, adjust the rigging, implement different screen types – thus, increasing the cycle speed of iterations and reaching proof of technology much faster than we otherwise would.

System 001/B is aimed at proving the technology; however, we accept that we might find more unknowns that will lead to further adaptations to the design. In either case, we expect to learn more about the overall system design and the performance of our technology with this system. This system will return to shore once we can/cannot confirm the proposed solutions and we will move forward with the necessary redesigns with these learnings.

We expect these next few months to be exciting and informative for The Ocean Cleanup. We will keep you updated through our social media channels as we learn more.