In 2014 and 2015 The Ocean Cleanup organized several expeditions to measure the vertical distribution of plastic, in high resolution for the top five meters of the ocean. Results were published in Biogeosciences and Nature Scientific Reports.

The smaller the pieces get, the more sensitive they are to mixing due to wind and wave turbulence. The measurements showed that even the microplastics stay on or near the surface in turbulent seas. The highest concentrations of microplastics were found directly on the surface and quickly went to trace concentrations when at only a few meters of depth. Larger objects, which comprise most of the mass of plastic in the ocean, are more buoyant and are found almost directly at the ocean surface.

It is important to note that we’re referring to the floating fraction of plastic. Part of the plastic that enters the ocean is of a plastic type that is heavier than water. However, most packaging and fishing gear (the two primary sources of ocean plastic) is made of buoyant types of plastic (Polyethylene and Polypropylene), and most life can be found in the top part of the ocean, which is why The Ocean Cleanup focuses on the floating plastic. 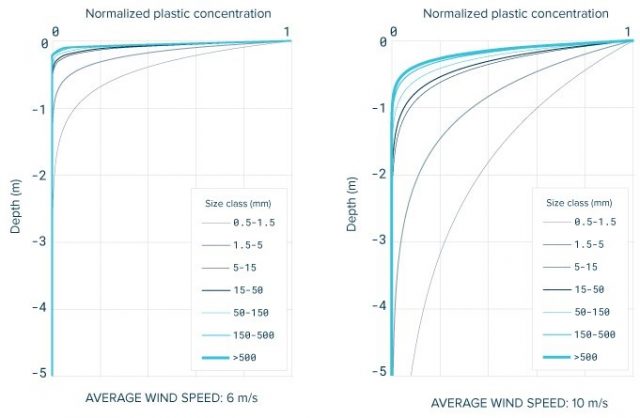 The vertical distribution of ocean plastic in wind condition that are average for the Great Pacific Garbage Patch (left) and more windy conditions (right). Derived from Kooi et al., 2016.